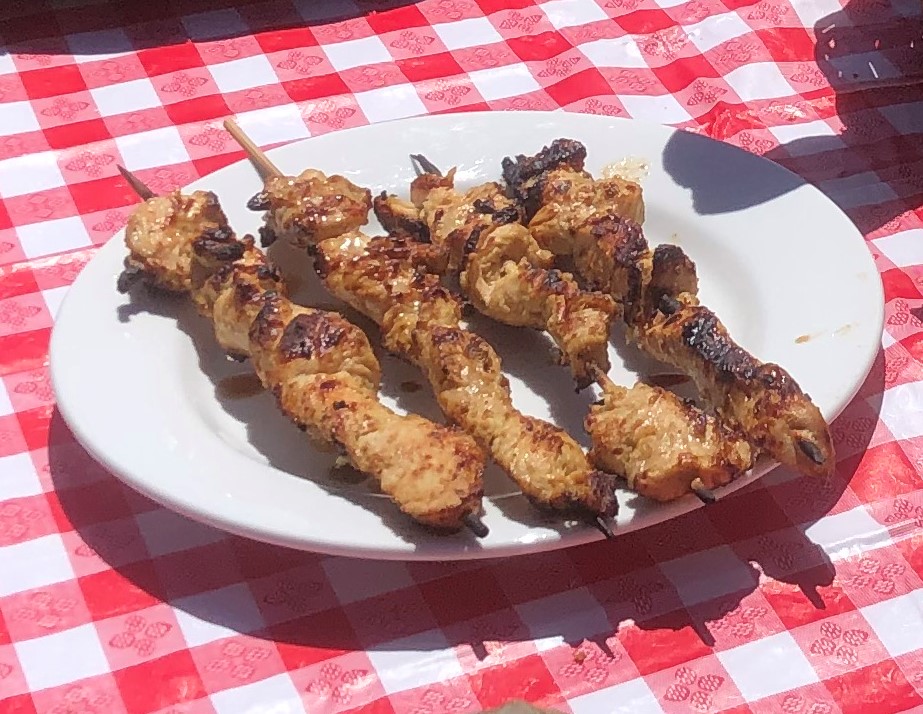 Grilling may seem to be as American as apple pie, but in reality, cooking over an open fire has been a part of life in Central Europe long before Christopher Columbus ever stepped foot here.

In Hungary, for example, bacon or pork belly – known as “szalonna” in Hungarian – is grilled only in the summertime. Hunks of szalonna are dusted with paprika before being skewered on freshly-cut, thin tree branches and held over a wood fire. Fresh rye bread is used to sop up rendered fat that drips from the sizzling, savory meat. Then, thin slices of tomato, lettuce and onion are topped with the szalonna, creating an open sandwich and the original BLT.

With our Mount Salem Kitchen Central European-inspired sauces and seasonings, you can bring the flavors of the region here to the States by using them as dressings, marinades, dipping sauces and finishing sauces with your grilled and summer dishes. Here are a few ideas to give your dinner a Central European twist tonight.

Our Haus Vinaigrette, which we created using flavors we discovered in Vienna, Austria and Verona and Venice, Italy, combines a classic Dijon vinaigrette base with the intense flavors of dried thyme, Worcestershire sauce and anchovy.

To us, it tells a tale of the hallmarks of Central European cooking. Thyme is found in most kitchens. Anchovy an ancient flavoring agent that’s used in a lot of modern cooking. Oil, vinegar and mustard are standard vinaigrette ingredients. And Worcestershire sauce’s ingredients reflect the ancient trading routes through Venice (by sea) and Vienna (by land) that connected Europe first with Asia and then America.

Read more: No Matter The Season, Visitors Are Loving Our Tyrol Goulash To-Go

It’s perfect for light dishes, including as a dressing for a summer salad; as a finishing sauce to dress grilled vegetables; and as marinade for chicken breasts before grilling.

A super-savory, flavor-packed condiment, our Haus Sauce is perfect for enhancing something a little bland or taming something that’s a little over-the-top thanks to its ingredients of sharp Dijon mustard, Worcestershire, oil, lemon juice, a variety of spices as well as anchovy, which hides in the background but rounds out the flavor profile with umami.

The powerful flavor of our Haus Sauce – which evokes the tastes associated with lush fields as well as the seashore – is what will have you using it again and again, since it works for everything including grilled or broiled meat, fish or vegetables, or even as a dip for freshly sliced crudités, a piece of fresh baguette or pretzels.

Read more: Our Vegetable Stew Makes For a Healthy Yet Hearty Meal To-Go

For summer dishes, we recommend it as a finishing sauce for grilled meat or fish (especially salmon) as well as a dipping sauce for sliced baguettes.

To most foodies, the flavors of the European Alps, a region that includes parts of countries such as Austria, France, Germany, Italy and Switzerland, are a mystery, and a surprising one at that – many would be shocked to discover that what’s eaten in alpine Italy, for example, is a world away from what’s eaten in Florence or Naples, but has much in common with what’s enjoyed in alpine Austria.

We spent years working to capture this region’s essence with our alpine seasoning, which captures herbs you might find in a meadow or vegetable garden yet with a savory twinge. It’s so versatile that we wrote a cookbook with over 30 alpine recipes that use alpine seasoning.

Read more: Our Pierogi To-Go Sells Out Faster Than We Can Make It

It’s fitting for the grill, as you can use it to season meat, fish or vegetables before grilling; season grilling side dishes like potato salad or coleslaw; or even as a salt substitute to season savory dishes before eating them.

Want to try these grilling accompaniments for your next backyard barbecue? Pick them up at our farm at 54 Mount Salem Road in Pittstown or order online.