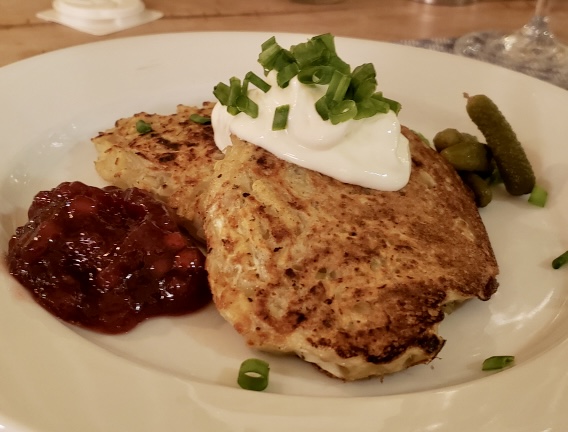 Although we as Americans are supporting Ukraine from afar, many of us don’t know a lot about Ukraine itself or its people. Before the war, there was a good chance that many of us couldn’t even find it on a map. However, most would be surprised to find that quite a few typical Central European dishes that we also enjoy here in the States have Ukrainian counterparts.

Since the United States has a large population of residents with a Central European heritage, most of us have tried – or at least know about – dishes such as pierogi and potato pancakes with sour cream. Turns out, Ukrainians too enjoy these exact items, topped with their own names.

Read more: A Ukrainian Was One Of The Muses of Mount Salem Vineyards

In Ukraine, pierogi, our favorite dumplings stuffed with a variety of comfort-food fillings, is known as varenyky. Plus, there, they also enjoy potato pancakes with sour cream, but they’re known as deruny.

This may seem strange at first bite, but given the history of changing borders in that part of Europe, it actually makes perfect sense. It’s also something that we as Americans – and especially New Jerseyans – can relate to. Depending on where you live in the Garden State, you might call it a hoagie or a sub, sprinkles or jimmies, Taylor ham or pork roll. The list of similarities is endless, just as it is when looking at the food similarities between Ukraine and Central Europe.

Read more: Our Bottled Wine Is Almost Ready To Share

Even the culinary customs are similar. For instance, in Central Europe, it’s nearly a requirement to have a freshly-based sweet on-hand each week to enjoy, which comes in especially useful when unexpected guests pop by. And when they do, they’ll also be greeted with tea, a distilled spirit (schnapps, in Austria) and some friendly chat. In Ukraine, this practice of hospitality is just the same.

Cultures on the other side of the pond can seem completely foreign to Americans, even given the melting pot that our country serves as. But the table has always been, and will always be, a place to find common ground, as we’ve always explored here at Mount Salem Kitchen.

Check out our Central European-inspired food products by visiting mountsalemkitchen.com/products/.